We had a great meeting on the 6th June at the National Waterways Museum in Ellesmere Port. Take a look at the agenda here, read about our discussions about empowering collections here and do get in touch if you’d like to join us!

Our next meeting will take place at the British Commercial Vehicle Museum in Spring next year – watch the space for more details!

The Association for Industrial Archaeology (AIA) is the national organisation for Britain. The AIA encourages and promotes the public benefit of the study of, and research in, the archaeology of industry and the industrial period, and promotes education in the identification, recognition and conservation of the industrial heritage. The Association funds Restoration Grants; awards cash prizes for research and publications; sponsors new research; lobbies bodies concerned with legislation, planning and funding; unites individuals, local societies, academics and field professionals; represents industrial archaeology nationally and internationally; runs conferences and practical workshops; publishes a biannual academic journal, Industrial Archaeology Review, and a quarterly newsletter, Industrial Archaeology News. 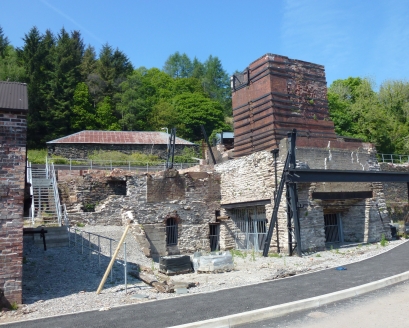 The surviving structures of Backbarrow Ironworks in South Lakeland are “the best illustration nationally of iron-smelting technology development from the early C18 to the C20”. The site has featured on the Heritage at Risk register for many years, and there have been a number of previous attempts to “save” it without success. Now, under the supervision of Historic England, work is nearly complete to conserve the remains of the scheduled ancient monument – which include the furnace stack, hot air stoves and blowing engine – alongside a housing development on the rest of the site. The Backbarrow Ironworks Heritage Trust has been established to take over responsibility for it. 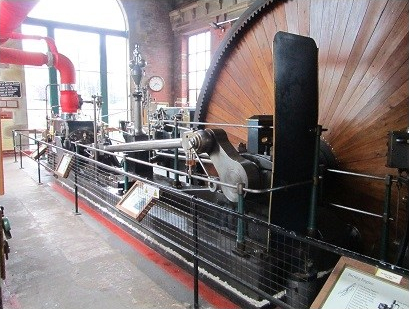 Bancroft Mill is a former cotton mill, the last to be built in Barnoldswick, Lancashire. It is now a museum. It houses two unique mill engines, one of which is the largest in Lancashire and both regularly run in steam raised in the Mill’s Cornish boiler. There are displays of weaving, mill artefacts and photographs. Two Lancashire looms are operated.  One of these looms is probably one installed in the Mill when it started weaving in 1920.  Teatowels and woven fabric can be bought in the Mill shop. Guided tours are run for visitors at regular times. 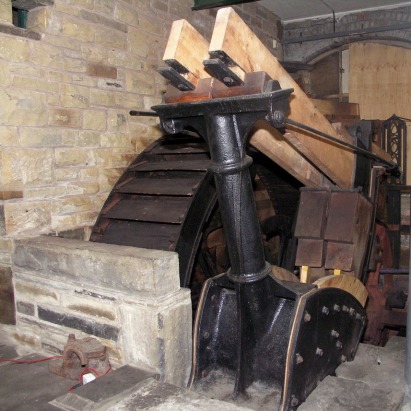 Calderdale Industrial Museum was re-opened in 2017, after being closed in 2000. It is owned by Calderdale MBC but is now run by an enthusiastic bunch of volunteers. Our first TripAdvisor review placed us 43rd out of 43 attractions in Halifax. We’re now number 1! The museum tells the story of how Halifax and Calderdale developed, over two hundred and fifty years, into a major industrial centre, on the back of the woollen textile industry. The museum is open every Saturday from 10 until 4 and available for booked visits at other times – please enquire.

Catalyst has been in existence since 1987, but our roots stretch back to the original museum project in Widnes Town Hall in 1982.  Initially “the Museum of the Chemical Industry”, we became a hybrid science centre and museum in 1986.  We sit at the end of the 1833 St Helens – Runcorn Gap Railway, alongside both the Mersey and the 1833 extension to the Sankey Canal, where the merger of the canal and railway led to the foundation of our local alkali industry in 1847.  The adjacent public open space was the location of Hutchinson’s Alkali Works, whose extant remains are a unique example of this type of enterprise.

The Council for British Archaeology North West has been promoting industrial archaeology in the region since 1959. The current Panel was established in the late 1970s with a remit to run an annual conference (the ‘North West Industrial Archaeology Conference’: the 39th conference is on 21st September at Bolton Library & Museum) and to raise awareness about, and campaign for, the protection of industrial archaeology in the North West (Chehsire, Greater Manchester, Lancashire, and Merseyside). The Panel meets three times a year and reports back to CBA North West. 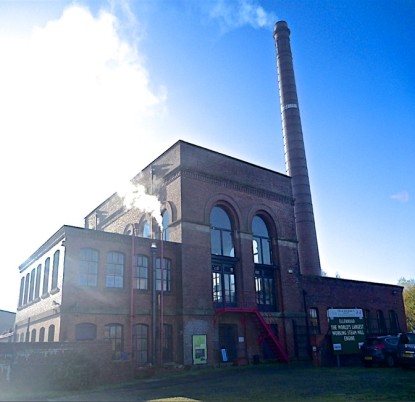 Ellenroad Engine House is a scheduled Historic Monument because it is a surviving Victorian Engine House. It is a Victorian building containing the underground flues, water system and a 1920 Lancashire boiler. The prize exhibit is the very large original steam engine most of which dates from 1892 but rebuilt in 1920. These are still in working condition and run monthly. The site is run by Volunteers who are also responsible for rebuilding various engines as these become available. We are concerned about the future and how the site will be run once the existing volunteers depart.

Eskdale mill, at Boot in the western Lake District, is the last surviving working water corn mill in the National Park.  Eskdale Mill & Heritage Trust, a registered charity, was formed by local people in 2003 to preserve public access to the mill and to foster interest in Eskdale’s wider heritage. The grade 2* listed mill is operated by a resident manager and volunteers.  During 2018-19 it was extensively restored in a £1 million project, funded by the National Lottery Heritage Fund and others.  The Trust also runs a small hydro-electricity scheme, powered by a modern water-wheel.

ERIH is a membership network and sites pay an annual fee which varies according to the category of membership.  The benefits of membership include enhanced profile, including a presence on ERIH’s well-used website (which currently attracts over 4000 visits per day) and its active social media pages; participation in ERIH conferences, events and initiatives; participation in local and regional routes of industrial heritage; and not least, association with a European organisation that is now recognised by the European institutions as the principle network for the promotion of industrial heritage tourism in Europe. To find out more about ERIH, please contact the UK Coordinator on uk@erih.net. 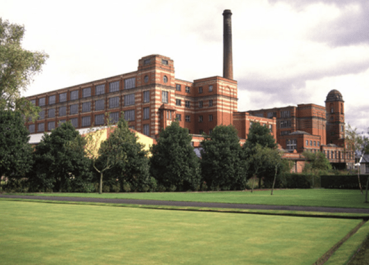 The Leigh Spinners Mill is one of the finest mill buildings in the country and is listed Grade II*. It remains in the ownership of the Leigh Spinners Company and is still in use for manufacturing carpets and artificial grass. The Mill is currently on the Buildings at Risk Register as it is under threat due to the high costs of maintenance. A scheme has been developed which sees its acquisition and restoration by Leigh Building Preservation Trust. Four phases of work have been completed creating a heritage, sports and enterprise hub and significant bids for the restoration of the remainder of the Mill are expected to be submitted in 2019.

Established in 2002, we preserve and protect records of milling heritage, fostering the cultural and educational values of mills and the milling community. A Nationally Accredited Archive Service, we are the UK’s specialist archive on the history of milling: the national centre for mill-related research, recording, learning and understanding; the appropriate repository for milling records. We care for over 250 collections of more than 3,000,000 documents and images, recording the rich and diverse crafts, buildings, equipment and people involved with mills. Over 76,000 of these records are freely available online and some 20 volunteers work to make more publicly accessible. 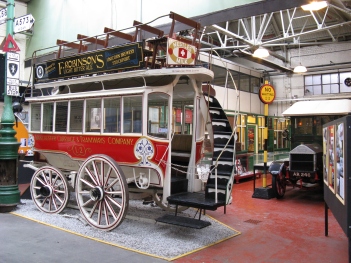 The Museum’s collection consists of around 80 vehicles, mainly buses and coaches, but with various ancillary vehicles, such as breakdown lorries and a tower wagon, plus a fire engine, lorry, tramcars, and Metrolink prototype.  There is a substantial archive and library of documents such as books, magazines, time and fare tables, maps, posters, reports, and so on, along with images, including photographs and films, and a large collection of smaller objects, such as uniforms, ticket machines, signage, badges and buttons, etc.  The Society is a registered charity, and a company limited by guarantee, and the Museum is accredited under the Arts Council scheme. 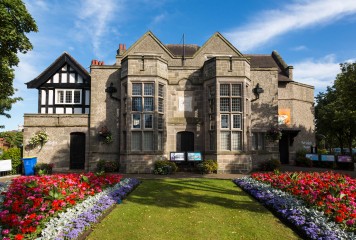 Port Sunlight is the vision of industrialist William Lever; a model village to house workers at his soap factory, Lever Brothers. Port Sunlight’s greatest significance is that for the first time it offered a vision of a workers’ settlement based on picturesque principles. From 1888-1938 over 30 different architectural practices were involved in the design of the village, including allotments, schools, a hospital, a swimming pool, an art gallery and savings bank. Port Sunlight Village Trust (PSVT) is an independent charity established in 1999 whose vision is to make Port Sunlight an inspiring place to live, work and visit. PSVT works to celebrate William Lever’s legacy through cultural and learning experiences for all. 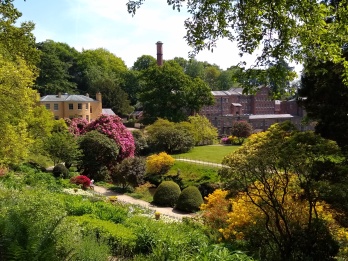 Quarry Bank is one of Britain’s greatest industrial heritage sites, situated just outside Manchester. The beautiful 430 acre Styal estate is situated along the River Bollin, at the heart of the valley is the Mill itself, a powerhouse of the industrial revolution which operates as a visitor attraction today. The buildings are filled with a mixture of modern and historic running machinery including an extensive range of textile machines, steam engines and a spectacular water wheel. The estate includes the village of Styal, Quarry Bank House and the Apprentice House built by Samuel Greg for his workers and his family. 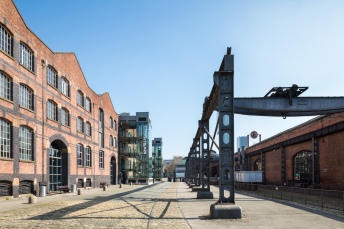 Part of the Science Museum Group, the Science and Industry Museum is devoted to inspiring its visitors through ideas that change the world, from the Industrial Revolution to today and beyond. The museum is uniquely placed on the site of the oldest surviving passenger railway station, in the heart of the world’s first industrial city. The museum cares for a globally important heritage site comprising five listed buildings, two of them listed Grade 1. The Science and Industry Museum combines the distinctive appeal of its historic site and collection with a vibrant contemporary science programme, making connections between the past and the present, between scientific theory and real-world applications.

Solway Aviation Museum, based at Carlisle Lake District Airport, is home to a collection of aircraft, aviation artefacts and displays reflecting Britain’s position as a world leader in aircraft design and innovation at the dawn of the jet age. The museums’ primary objective is the preservation of our Aviation heritage, it’s display, and interpretation. Take a nostalgic journey back to Wartime Cumberland and the men and women of the RAF who served in World War II. The museum is run by a dedicated team of volunteers who painstakingly restore many of the exhibits. Through their love and knowledge, they are preserving aviation history for generations to come.

THE HERITAGE TRUST FOR THE NORTH WEST

As a Building Preservation Trust registered with the Architectural Heritage Fund,  its aims are to restore and find appropriate new uses for Buildings at Risk in the North West.  Its headquarters are at Higherford Mill (Grade II listed), Barrowford near Nelson, which it saved from demolition in 1999; the Mill featured in the BBC TV Restoration Series and provided the early loom for ‘The Mill’ drama on Channel 4. It owns mill engines under restoration at Grane Mill Haslingden (Grade II* listed but on the HE Heritage at Risk Register) and one demonstrated by Weavers’ Triangle volunteers at Oak Mount Mill Burnley. 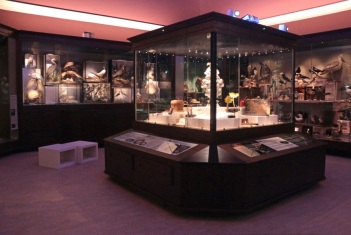 The Museum and the Library originally opened in 1848 as the first rate-supported library in the UK, before moving to their current premises in 1858. The art galleries were subsequently added in 1877 and 1931. Operated by Culture Warrington, Warrington Museum and Art Gallery has the distinction of being one of the oldest municipal museums in the UK and much of the quintessential character of the building has been preserved. With just short of 200,000 objects the museum’s collections are very broad, covering a wide range of subjects such as Archaeology, Art, Ethnology, Natural History, Photography and Social History. 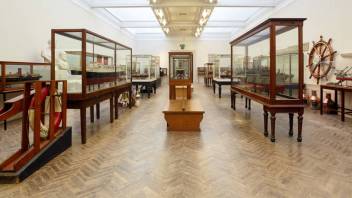 Situated in the heart of Birkenhead, the Williamson Art Gallery & Museum opened in 1928 and has a diverse collection of artworks and artefacts. Given the rich industrial history of Merseyside, a large part of the collection reflects this with objects from the industries which flourished in the area from the 18th– 20th century. This includes Della Robbia pottery, Liverpool porcelain, as well as a great many maritime artefacts from Cammell Laird shipbuilders of Birkenhead, who were one of the chief names in British industry in the 19th century and continue to be today.