Historic England has published a new report exploring the potential of under-used and vacant mills. It identifies their possible contribution to rebalancing the country’s economy and improving environmental stability, and highlights regeneration success stories since 2017.

Textile mills were the original Northern Powerhouse. From the late 18th century onwards, they drove forward the industrial revolution. They triggered technical innovation, stimulated new trade and transformed the transport network. Silk, cotton, and woollen production shaped the landscape, economy, and communities of Greater Manchester, Lancashire, and Yorkshire. However, with the 20th century decline in national textile manufacturing, many of these monumental and characterful buildings face uncertain futures.

The 2021 report update can be accessed by following this link: https://historicengland.org.uk/images-books/publications/driving-northern-growth-repurposing-mills/

It is based upon a more detailed technical assessment by Cushman & Wakefield. 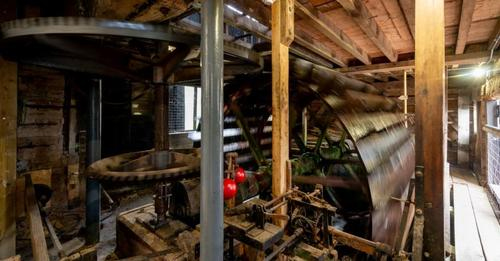 Whitchurch Silk Mill has launched a Crowdfunder appeal for £6,000 for urgent and unexpected repairs to the waterwheel that powers the site. The mill is the last example in the country of a silk mill that is still producing silk using historic machines and training highly skilled weavers to use these pieces of living history. Built in 1813, it is Britain’s oldest working silk mill and each year is visited by thousands of people who discover its role in the nation’s industrial silk revolution.

Last restored in 2014, the eighteen months of COVID lockdown and inactivity has hastened the deterioration of many of the wooden parts of the cast-iron waterwheel. The ‘starts’ which attach the planks to the iron frame need replacing, as do the ‘floats’ which make up the paddles. Replacing the timber is a significant undertaking as each piece had to be specifically cut to fit the old wheel – no socket is identical, so each of the 90 oak starts has to be individually shaped. Similarly, each float (paddle) has to be modified to accommodate the drop-in ceiling height over time. It will also be necessary to replace the bronze bearing which supports the end of the axle of the wheel and allows it to turn freely.

The waterwheel provides a vital insight into water power and the industrial heritage of Whitchurch, the River Test, and Hampshire. It powers the historic machines used to weave the silk fabric. To ‘keep the wheel turning’ follow this link to donate:

As Coldharbour Mill celebrates its 40th anniversary as a Museum, and approaches 225 years since the original Grist Mill and estate was bought by Thomas Fox in 1797, Coldharbour Mill Trust are consulting on the future of this nationally significant heritage site as part of its strategic review process.

The site has been described as “probably one of the best-preserved textile mill complexes in the country. It retains the full range of buildings and power system features which characterised the development of the 19th century textile mill with much of the machinery that was used at the site in the 20th century.” – English Heritage, Historic Buildings Report.

It had been increasingly difficult for heritage attractions such as Coldharbour Mill to secure resources to maintain their heritage sites pre-pandemic, a trend which had been seen all across the UK. Having been faced with the challenge of guiding the Trust through a pandemic and into a world which will be very different Coldharbour Mill’s Board feel it is important to review the direction of the Trust to develop a long-term and sustainable future whilst balancing this against the change in the heritage landscape that has been seen in the last year.

The process involves a wide range of stakeholders including the general public, staff, volunteers, visitors, neighbours, community, special interest groups and any other stakeholders who are asked to take 5 minutes to complete a short questionnaire.

Jackie Dawkins, Chair of Trustees for Coldharbour Mill Trust said ‘In order for Coldharbour Mill to thrive and deliver a sustainable future, we need to diversify and find new ways of increasing participation and generating income. We want to develop the Mill with the support and involvement of the community, our supporters, our visitors and anyone who already has or could have a connection with the Mill’.

Coldharbour Mill Chief Executive Martin Halse is asking the public to give their feedback via a questionnaire on the Mill’s website by Sunday 11th April. The results will then be used to inform the Trustees decisions for Coldharbour Mill’s future direction.

You can have your say by going to www.coldharbourmill.org.uk.

One of the most important building conservation principals is that to save a historic building you have to give it a use. Examples of such re-use can showcase the community and heritage value of historic structures. Thus, two new case studies on the successful reuse of historic industrial buildings added to Historic England’s ‘Mills of the North’ webpage do exactly that.

The first case study is the Grade II listed Conditioning House in Bradford. This building was built by Bradford Corporation in 1900-2. It was used to quality check and control the moisture content of textiles by means of laboratory examination and certify their true weight and length. As such it was the only property of its kind in England. This unique building is being converted into a mixed use development with apartments, a residents’ gym, and office space. Scheduled for completion later in 2021, it aims to create a thriving new neighbourhood in the heart of the city. More details here: https://historicengland.org.uk/get-involved/protect/mills-of-the-north/success-stories/#e2bc8444.

The second case study is Brierfield Mills, Pendle, Lancashire, a Grade II listed cotton spinning complex built in 1868. The mill was purchased by Pendle Council in 2012, soon after it closed, with funding from the Homes and Communities Agency. The local M.P., Andrew Stephenson, has been heavily involved in securing a £32m redevelopment programme. He gives his view on how this regeneration scheme is transforming the area, with new apartments, leisure facility, adult learning centre, creative arts studio and canal marina. More details here: Latest Success Stories | Historic England

The ‘Mills of the North’ webpage also includes details of the successful regeneration of the water-powered Queen’s Mill in Castleford Mill, an 18th to 20th century flour mill, and the Grade II and Grade II* 19th century Hunslet Flax Mill in Leeds.

The Friends of the Flaxmill Maltings are offering online talks to interested bodies and groups. The Friends have been running tours and open days since their formation to make these internationally important historic buildings accessible so that organisations, groups, and individuals can explore, learn, participate in, and enjoy the unique and varied heritage of this site.

At the moment they are focusing on offering online talks for groups. This can be an overview talk or a suite of shorter talks about particular themes of interest to your group: architecture, social history, restoration. They take between 40 minutes to an hour, with the opportunity to ask questions.

The Friends of Flaxmill Maltings host these live via their Zoom channel, which is easily accessible to all invited by just clicking a link. So far they have given talks to Arts Societies, WI groups, U3A groups, museum volunteers, archaeological societies, and rotarians, as well as international groups.

Talks are free, but a donation is appreciated. If you are interested in a talk on Shrewsbury Flaxmill Maltings or a specific part of its history please email them on info@flaxmill-maltings.co.uk.  There are more details on their website here: https://www.flaxmill-maltings.co.uk/visit-and-talks .

Queen Street Mill Museum, which is run by Lancashire County Council, has openings for two posts in 2021. Both are permanent and the closing date for applications is the 29th January 2021.

Firstly, they are seeking a Weaving Technician. This role is to perform preventative maintenance, repair, and overhaul of the historic textile machinery held in the collections associated with Queen Street Mill Textile Museums. The job is for 37 hours a week. For further information and how to apply, please click here.

Secondly, they are look for a Technical Demonstrator for a range of historic machinery in a safe manner to provide engaging interpretation to visitors.  This post will assist in the maintenance of the machinery and its environs as required and contribute to the manufacture of woven fabric to a high standard.  The post will also support all museum operations and activities in order to ensure visitors gain the best possible experience of their visit to the museum. The job is for 29.6 hours per week. For further information and how to apply, please click here.

The Mills Archive Trust preserves and protects records of milling heritage to make them freely available to the public. They are looking to fill a new role, that of Development Manager. The Development Manager will be responsible for growing income to cover core costs and allow for sustainable growth. The ideal person will be passionate about heritage and be a strategic thinker.

It is primarily an office-based role, though with some flexibility for home working and the opportunity for regional travel. The link below will take you to the job advert on the Guardian Jobs website https://jobs.theguardian.com/…/development-manager/…

You can also sign up to stay in the know about your favourite mill-related interests here: https://millsarchive.org/register-interest/